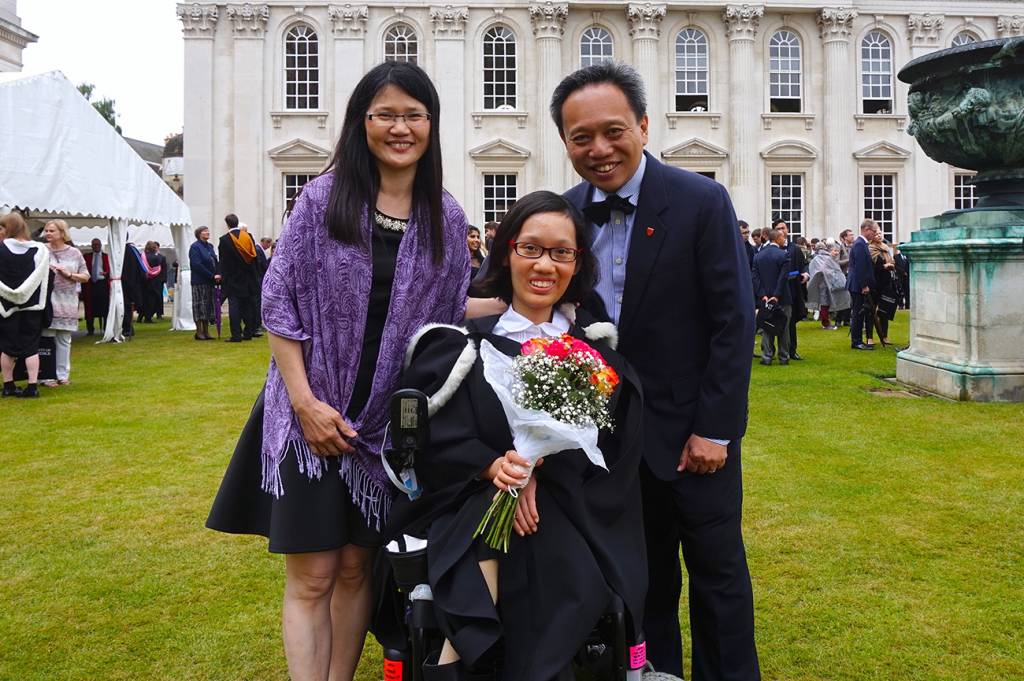 Alicia Loh was born with Spinal Muscular Atrophy (SMA), a neurological condition which causes muscle weakness. Due to this, she is unable to walk and over the years, she also developed severe scoliosis, a sideways curvature of the spine, which would have been fatal if left untreated.

Her parents, Joseph and Rachel Loh, share their journey and the miracles that enabled Alicia to graduate with an undergraduate Law degree and a Master of Law degree (First Class) from the University of Cambridge in the United Kingdom (UK). Joseph is a great supporter of Family First Malaysia (FFM) and an active participant in FFM activities.


Search for the Right Treatment

As parents, once we found out about her scoliosis condition, we met with doctors at a local hospital to find out about spinal corrective surgery. We had done our own research prior and discovered there were a lot of risks with this surgery. Naturally, we had our concerns and questions which we posed to the doctors at this hospital, but they were unable to give us an answer. However, we proceeded to fix a surgery date.

We were supposed to meet with the surgery team before the operation. It was on a Monday. We took leave to attend the meeting, scheduled for 8:30am. However, we waited until close to 4pm and still no one turned up. A junior doctor eventually came. We found out to our dismay and frustration and that the meeting had been cancelled. It turned out that Alicia would be their first ever case due to the rare nature of her condition (SMA). We could not let her go through such a risk, so we decided to cancel the operation.

We had given up all hope on treatment for Alicia. We decided to bring her to the United States (U.S.) to visit Disneyland and Universal Studios to fulfill her last wish.  While we were there, someone connected us with Dr George Picetti. I (Joseph) rang Dr Picetti and found out that he was no ordinary orthopedic surgeon, but also the inventor of minimal invasive spinal surgery! He turned out to be the answer to our prayers and the best person to treat Alicia’s condition.

Dr Picetti was a third generation specialist in this area. Amazingly, he was extremely accommodating and approachable. Over the phone, he asked me to email him Alicia’s latest spine curvature x-ray and to list out all my questions. He answered immediately and answered all my questions, allaying my doubts. He also enclosed his CV. He had written several books on this topic, and had just successfully operated on a young lady with a similar condition to Alicia. This added to our confidence in him. Unfortunately, it would cost us a lot to treat Alicia in the U.S.

Upon examining her x-ray, Dr Picetti advised us to send Alicia over immediately for assessment. We had returned from our holiday to Malaysia by this time. Therefore, we made a second trip to the U.S. after Chinese New Year.

After the assessment, Dr Picetti told me that surgery needed to be done immediately due to the severity of her condition. Otherwise, if she got sick, it would be very hard for her to recover. The surgery would cost US$380,000, which was more than RM1,000,000. Who would have such an amount sitting in the bank?

We were in a dilemma. We had less than a month to book Alicia in for surgery. In Malaysia, I tried all avenues that I could think of, but was unable to raise the money. A week before the scheduled surgery, the hospital wanted to cancel the surgery as they had not received the funds.

It was already Saturday and we had to have the money by the end of the week. I was ready to give up on the treatment plan, and when I (Joseph) Skyped with my wife, Rachel, who was still in the U.S. with Alicia, I suggested that they should buy a ticket home. Instead, Rachel said, “Why not go to church?” So I did.

At church, I approached the pastor and explained what we were going through so that he could pray for us. The pastor suggested that I go and talk to the gentleman he was just talking to. When I went up to this gentleman, he asked me how I knew he was there. I said I had just talked with the pastor. After telling him my intention, he said, “Why don’t you come to my office on Monday?” When I went home, I prayed to God. This gentleman didn’t know me. He had no reason to lend me the money. I wondered if this was the right move to make.

While praying, God reminded me of brother Tan Tek Seng from my Full Gospel Business Men’s Fellowship Malaysia days (Tek Seng is currently the Chairman of Family First Malaysia). I knew that brother Tek Seng knows this gentleman very well. I felt God saying, “Ask brother Tek Seng to go with you. He will be able to give you a strong recommendation.” So I called brother Tek Seng. Praise God, he agreed to go with me to see the gentleman on Monday morning.

On Monday, we went to this gentleman’s office. The first thing this gentleman did was to turn to brother Tek Seng and ask, “Do you know him?” Brother Tek Seng replied, “Yes, I know him. He goes to the same church as me. We have been serving together for many years. He is a faithful brother.” Then the gentleman turned to me and asked, “How much do you need and what do you have as collateral?” I told him and pledged my house as a guarantee for the loan. He called his lawyer in and said, “Give him the money.”

The following day, we sat down all day to prepare the loan agreement with the lawyer. I flew to the U.S. on Wednesday and arrived on Thursday. We received the money that same day, and we proceeded with the surgery on Friday. Everything was done on time –  God’s perfect timing. Praise God, the surgery was also a success.


The Road to Educational Success

Due to Alicia’s medical condition, we had decided to homeschool her since she started primary school, after all other options had been deemed unsuitable to meet her needs.

A few years after Alicia’s surgery, we rang up a number of institutions in Kuala Lumpur, but disappointingly, all doors were closed to her. Finally, one of the colleges made an appointment for us to meet with the Head of School. Thankfully, the management accepted her. During the 1.5 years at college, she was very focused and did very well. In fact, she received Top in the World and Top in Malaysia awards for her excellent A Levels results.

After many prayers and much discussion, Alicia applied to Cambridge. Thank God, she got an offer and met the conditions. My wife had to accompany her throughout her studies in the UK, since Alicia requires help with her medical needs. I commute as often as I could. It wasn’t easy, but we are so proud of Alicia as she has now graduated with both an undergraduate degree in Law and a Master of Law degree (First Class) from the University of Cambridge, and has now secured a job in an international legal firm in London. She starts work in August this year (2019).

Alicia says, “Everything that has happened, only God has made it possible. My parents have been incredibly supportive and I am very blessed to have their support over the years, in the midst of the challenges that have come our way.”

The Loh family give all credit back to God, saying, “LET ALL GLORY AND HONOUR BELONG TO GOD ALONE!”

About the Author: Jess Chan is married and has two school aged daughters. Aside from being full-time “minister of home affairs” and “transport minister” to her little family, she also serves as the Field Administrator for World Outreach International, a Christian mission organisation that has a presence in 70 countries. Jess and her family moved back to Malaysia in 2017, after spending 10 years in New Zealand and 6 years in Thailand.